Caring for Your Rabbit - First Days at Home 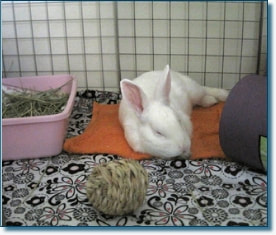 Rabbits are prey animals. This shapes just about everything in their lives. Understanding the implications of this takes you a long way to understanding your bunny. Rabbits are shy until they learn to trust you and their environment. Once he does, he’ll enjoy interacting with you. But at first, you need to give him time and space to learn that you are safe. Sit on the floor and let him come up to you - don’t reach for him, and avoid picking him up. From his point of view, someone reaching for him, children running after him or someone grabbing hold of him feels like he has been “caught”. It’s in his nature that being caught is a bad thing. So, take it slow and gentle while he gets to know you. It will speed up the process of his learning to trust you. 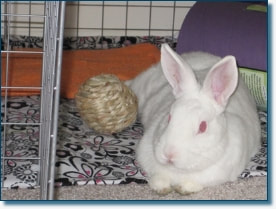 Make your bunny's pen his sanctuary - somewhere he can go to feel safe and be left along. Don't reach into his pen and bring him out; let me come out on his own. Don't clean his pen when he's in it; do so when he's out running around. He needs a place of his own. If you give him this, you will have an easier time litter training as he'll be more inclined to use "his" litter box. He will feel safer in general, and thus will more quickly interact with you. And his personality will be fully revealed to you, because he'll feel safe to do so.

Remember that everything has just changed for him. His home, all the smells and sounds he was used to, are gone. Now there are new smells, sounds and a home. Humans are around, interacting with him. Be very patient with him. Let him be in charge with how much you interact. Don't be discouraged if he isn't very interactive with you for the first several days or week. Once he learns you are safe, his natural curiosity will bring him to you.

We recommend that for the first week or two you restrict your new bunny to his pen (if you are using one) and a limited exercise area, preferably immediately outside his pen so he doesn’t need to be carried to the exercise area. You can purchase an exercise pen (at a pet supply store) or use the storage cubes described in our Housing Section, to create an area outside his pen for him. Let him come out of the pen into the exercise area on his own. You can sit in the exercise area with him. Let him come up to you. Give him a little treat, such as a small piece of banana or papaya. Hold the treat out to him in the flat of your hand. He’ll learn that despite the fact that you are huge and smell funny, you are a good person! (Don’t over-do it will the treats, however! *A very tiny, small amount of fruit each day is all that their digestive system can healthily handle.) Sit with him this way when you are reading or watching television. You’ll be able to tell when he’s getting comfortable with you.

Once he is established in your home, and he is used to using the litter box, gradually give him more space in which to run and exercise. For example, let him have the run of the room in which you have his pen - but block the door so he has access to that room. He'll want to explore the entire room. He'll probably mark it by urinating or pooping a bit - just clean it up and know that his litter habits will improve (and read the section on Litter Training in our Housing Section.)
Many children want to hold and cuddle your new rabbit. They’re so cute, after all. However, many rabbits aren’t going to enjoy being held, especially when they don’t know you. You’ll need to teach your children to be gentle and patient with your bunny.