Picking Up Your Rabbit

Never, ever, pick up your rabbit by his ears or scruff of his neck. You’ll hurt him and can do permanent damage.
You want your bunny to be well supported and held firmly, which helps him feel safe. 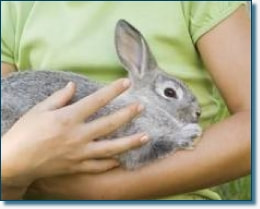 The position in which you’ll hold and carry your rabbit is with his side against your chest, pointed towards the left, with your right hand around his front shoulders and your left arm and hand supporting his underside and hind feet. (If you are left handed, reverse these instructions for left and right.) In this way, if he struggles, you have a good hold of him. Hold him firmly enough so that he knows he won’t fall. Now, to get him into this position!

Approach him calmly and slowly. Stroke his head or back a bit. Then, put your hands around his front shoulders. Lift him up and against your chest and, once he is there, slide your left hand down to support his hind feet, with his underside resting on your left arm. Keep your right hand on his front shoulders and your right arm against his body, pressing in slightly. In this way, if he struggles, you have a good hold of him.

If he keeps running away from you, look where he his headed and reach your hands in front of him. Frequently your hands will get there when he does and you can catch him at his front shoulders, which is the easiest and safest way to stop him.

He won’t like being held in the air as it will feel unsafe to him. So, prior to picking him up, get down as close to him as you can, to minimize the amount of time he is in the air. Likewise, when you put him down, don’t hold him out in front of you in both of your hands, with him facing away from you. From his perspective, he’s just facing open air in front of him and will feel very vulnerable. Get down as low as you can and move him down from your chest, but don’t rotate his body away from yours. Keep a firm grip on his front shoulders and your left arm supporting him for as long as you can.
If your bunny struggles when you are picking him up, it’s not unusual that you end up with your hands around his middle or hind portion. Don’t increase the pressure of your grip in an attempt to restrain him. It is easy to damage your rabbits back or hind skeletal structure. His bones are actually quite delicate as nature has built him for speed, so his bones are light and fragile. So, if he slips in your hands from the position you want, it’s frequently better to just let him go and try again.

Always make sure you are supporting his bum, as they have delicate spines and may try to kick their back legs if their behind is not properly supported.  A stressed rabbit can struggle and kick its hind legs strong enough to actually break their own spine. Avoid this situation entirely by remaining calm, and always providing the back and butt support they need while carefully carrying them close to your chest and shielded by your arms in the manner described above, for maximum safety and support.

You also never want to risk dropping them, as they can injure themselves with a bruise or worse - broken bone. Safety first. They are ground-loving creatures, and they are looking to you for the mood reading -- remain calm, soothing, and loving toward them, and they will feed off your calm energy as well when trying to pick them up. They may still not like being picked up (and actively disagree with you), but by remaining calm you'll be able to gently convince them and accomplish this safely.

If he is in his pen that has a top or a cage, you’ll need to first get him outside of it. The best way is to open the door and let him come out on his own. If you need to remove him from the cage, it’s usually best to do so hind end first. Put your hands around his front shoulders and middle section area. Lift him as little as possible and bring him through the door - hind end first. If he struggles too much, or he slips forward so that your hands are around only his middle or hind end, it’s usually better to let him go and try again. If that happens, gently pet him and talk reassuringly to him, then try again.